The one sheet is available in PDF format by clicking here.

The Story Behind Rachel’s Song

One afternoon in 1981, my wife, Linda, came home from work and asked me, “What is the name of this song that I have been humming all day?” After she hummed a little bit of the song, I told her, “I don’t know the name of it.” She said, “You don’t? You play it on the piano all the time.” I told her that it was something that I made up. She got really excited and insisted that I write down the music and make a recording of it so that I would not forget it.

After I wrote the sheet music we tried to come up with a name for the song, but nothing seemed to fit. The music stayed in my piano bench for a couple of years with no name.

In 1983, some very dear friends of ours had a baby girl named Rachel and they asked my wife and me to be her godparents. Of course we accepted. A few months later, Rachel was Christened and at the end of the service, I got the inspiration to play my song then and there.

As I played, the music seemed to touch everyone and before the song was over there was not a dry eye in the church, including mine.

At the conclusion of the song, I announced that “from now on the song will be known as ‘Rachel’s Song'”. For the first time the song had a name and it seemed to be the perfect fit.

How Rachel’s Song Touched So Many... 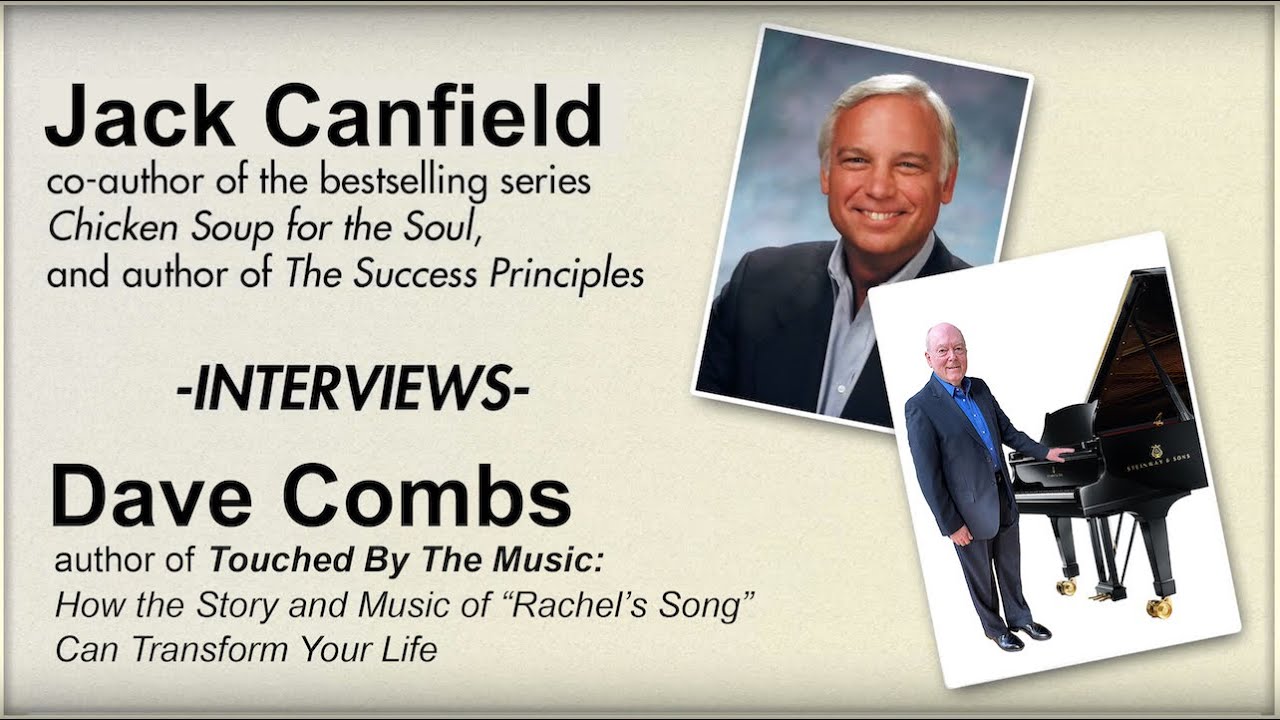 The story about Rachel’s Song that has touched lives all over the world is certainly one that is bound to inspire. Watch Dave’s interview by renowned “Chicken Soup for the Soul” author, Jack Canfield. This reveals how the music of Rachel’s Song can transform your life and your outlook on what is truly possible.

A dozen years ago my wife, Linda, came home from work one day humming a tune. “What’s the name of this song?” she asked. “I can’t get it out of my head. You play it all the time on the piano.”

“Doesn’t have a name,” I said. Nearly every evening I’d unwind at our old Knabe baby grand — messin’ around at the piano, as my mother use to put it. Coming home from my job at AT&T, I sat down at the keyboard to relax. I played from sheet music, or accompanied songs I heard on the radio. Sometimes I just made something up. But it had never occurred to me until now that I had actually written a song.

At Linda’s urging, I wrote out the melody and chords. “If something ever happens to me, the song won’t be lost,” I told her. Several months later I played it at the christening of our friend’s baby girl, Rachel. It didn’t have words, just a tune. From that day on, we called it “Rachel’s Song,” for our goddaughter.

Over the next three years, my work kept me too busy to give my melody much thought. I traveled around the country consulting with plant managers on how they could make their factories more efficient with a computer system. “Sometime when you are in Nashville,” Linda said, “why don’t you record a demo? We could give a copy to Rachel.”

“DAVE COMBS is shown here with his wife, Linda, and their cat, Melody. We at Guideposts found out about Dave and his music through one of our writers who was awaiting surgery. While browsing in a gift shop she was so comforted by Dave’s music that she bought a tape. Later she ordered more. She asked the person who took the order on the telephone to tell the composer how much the music had helped her. She heard a chuckle and then the remark, “That’s me.” (Dave answers many of the customers calls himself.)”

During one of my trips to the AT&T plant in Nashville I found myself driving around Music Square, where the Country Music Hall of Fame and many record companies are located. I had hoped to find a studio there, but it was seven o’clock at night and almost everything was closed. I was about to give up when I noticed a building that looked like a log cabin with an old-fashioned waterwheel in front. Through the glass door I saw a man sitting at a desk.

The tall, thin fellow dressed in blue jeans answered the door and introduced himself as George Clinton. “I’m looking for a studio to record a demo of a song I’ve written,” I said. My eyes took in the walls where framed gold and platinum records and photos of recording stars hung.

“Well, you’re in one!” George said in a deep Southern drawl. It turned out that I’d stumbled on The Music Mill, one of Nashville’s top recording studios. George gave me a tour of the place and suggested that I contact Gary Prim, a talented session musician, to make my demo.

On my next trip to Nashville, George arranged for me to rent a tiny studio (the cheapest he could find). Gary Prim set up his synthesizer on an apple crate, conferred with the engineer and sat down at the keyboard. In just over an hour I had a demo tape of “Rachel’s Song”.

Afterward I jumped into my rental car, shoved the cassette into the tape player and headed back to my hotel. I couldn’t believe my ears. This is my song, I told myself. I circled Nashville on the interstate three times, playing the tape again and again.

When I got back home to Winston-Salem, my friend Bob McHone offered to feature “Rachel’s Song” on his easy-listening radio program. As soon as he played it, the station’s phones lit up with calls from folks asking, “Would you play that one again?” and “Where can I buy a recording of that song?”

I sold copies for the cost of a blank tape, and before long I’d received wheelbarrows full of mail. A woman whose daughter Rachel had died of a brain tumor told me the soothing melody brought back wonderful memories. A note arrived with a picture of a beaming autistic daughter hugging the tape to her chest. “Your music reached her,” the note read. Doctors and nurses wrote to say that the music calmed their patients. Brides chose it for their weddings. One letter even described how my music had turned sitting in a traffic jam into a delightful experience.

Within a couple of years I’d written enough songs to record an entire album. I went back to Nashville, hired Gary Prim again and we made the best recording we could. I ordered copies on cassette and compact disc.

Then I tried the big record stores. “We’ve never heard of you,” they said. “We can’t sell these.” I approached a few distributors. “You’re not a big enough name,” I was told.

One day I received a call from a friend of a friend. She owned a gift shop and had been playing my CD there. Shoppers kept asking her, “What’s that music? Can I buy it?” She wondered if I could sell her a few compact discs. Could I ever! To my amazement she called back four days later with the urgent message: “Send more.”

That started me marketing my music directly to gift shops. At the library I made photocopies of phone numbers for gift shops all over the country. Every Saturday I called store manager after store manager, talking until my voice became hoarse. I made so many calls that at the end of the month my phone bill arrived in a box.

Calls led to sales, and more sales made me think I should do another album. Before long the notion of working on music full-time took over my thoughts. But it seemed fool-hardy. Linda had recently given up her full-time job to oversee the care of her aging parents. We no longer had her income and benefits to depend on. And I was just a few years short of retirement myself. How could I give up a steady paycheck?

One night I prayed for guidance before going to sleep. The next morning I woke up to the strains of “Rachel’s Song” floating from the clock radio. Another time, while driving, I heard a deejay announce, “And now, here’s my favorite — ‘Rachel’s Song.”‘ I nearly drove off the road.

At times I doubted my own ability. To make a success of my music business I figured I’d have to do one or two albums every year. “That’s a lot of music,” I told Linda. “Can I write that much? Even if I can, will people like it?”

“You have to trust,” she said.

After agonizing over my decision for months, I was sitting in church one Sunday morning, remembering the mail we’d received that week from people all over the world. They didn’t know about the decision weighing on my mind, yet they addressed my concerns. One man wrote, “Your music is what God put you on this planet to do.”

I got to thinking about how the Bible talks about using your talents wisely. If you invest your talents they’ll multiply. If you don’t, they’ll be taken away. It’s that simple.

“Would I serve you better by writing and producing music?” I asked the Lord. The realization came to me in the stillness of the worship service. You must think I’m one of the densest Christians ever, Lord. More than 10,000 wonderful letters have come my way and it still took me all this time to get your message.

I resigned my position at AT&T. I haven’t had one split second of doubt since. Linda and I both work the business full-time. She helps me answer letters and fill orders.

Sometimes when the Lord inspires me with a new song, the melody is simple. It’s at those moments I understand more fully that God’s plan for our lives needn’t be complicated either. When He gives us a dream, He’ll show us how to make it come true.